The Bohr and Teller Plaques 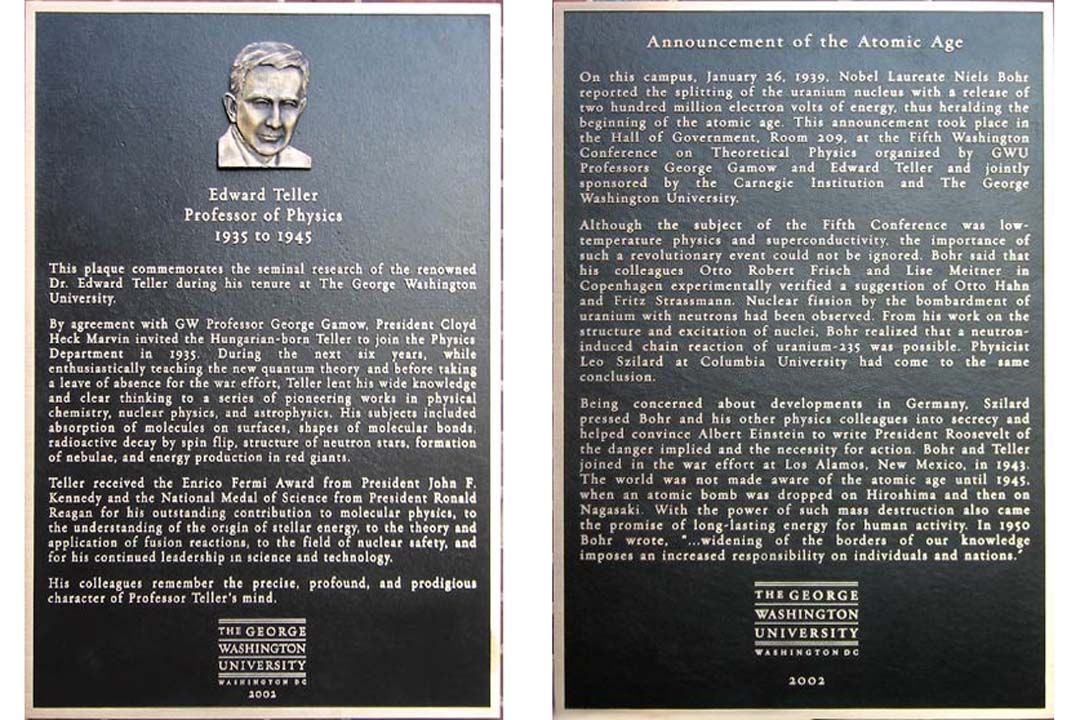 The first plaque memorializes the contribution of GW Professor Edward Teller while he was a professor at GW (1935-1945). A similar plaque for George Gamow was unveiled by President Trachtenberg in the Spring of 2000 in front of Samson Hall.

Gamow was invited to GW in 1934 by then GW President Cloyd Hecht Marvin. Marvin wanted to strengthen physics at GW. At first he thought to build an experimental program, but Merle Tuve at the Carnegie Institution convinced him that theorists would be less expensive and so more effective use of the money he had to spend. President Marvin had Gamow and Teller in mind, as he had met them some years before. Gamow agreed to come if there would be funds for a yearly physics conference and if Teller could join him.

In 1935, Teller moved into a home on Garfield Street with his wife Mici and began work. His teaching duties were mainly lectures on the new quantum theory. Although he was 27, most of his students were older. A few became research collaborators, including Sterling Hendricks, Ferdinand Brickwedde, and Stephen Brunauer. Gamow often engaged Teller with ideas in the world of nuclear physics and astrophysics, but Teller largely remained a chemical physicist during his time at GW, or, as physicist Placzek called him, a “molecule inspector”.

While at GW, Teller was a central collaborator in producing a series of seminal papers in chemical and nuclear physics, including molecular adsorption on surfaces, shapes of molecules, spin-induced radioactive decay, neutron stars, nebulae formation, and energy production in red giants.

Teller received the Enrico Fermi Award from President John F. Kennedy and the National Medal of Science from President Ronald Reagan for his outstanding contribution to molecular physics, to the understanding of the origin of stellar energy, to the theory and application of fusion reactions, to the field of nuclear safety, and for his continued leadership in science and technology. His colleagues remember the precise, profound, and prodigious character of Edward's mind.

The second plaque describes the announcement of the atomic age, an event which took place on GW's campus on January 26, 1939. On that date, Nobel prize winner Niels Bohr reported the splitting of the uranium nucleus. Bohr was attending the Fifth Washington Conference on Theoretical Physics organized by Professors George Gamow and Edward Teller of GW and by the Carnegie Institution. Professor Gamow later became famous for proposing the big bang theory of the universe, and Teller for his work on the hydrogen bomb.

The implications of the announcement of the atomic age were not made known to the public until 1945. In 1950, in an open letter to the United Nations, Bohr wrote, “Above all, it should be appreciated that we are faced only with the beginning of a development and that, probably within the very near future, means will be found to simplify the methods of production of the active substances and intensify their effects to an extent which may permit any nation possessing great industrial resources to command powers of destruction surpassing all previous imagination.” In the same document, he says, “...widening of the borders of our knowledge imposes an increased responsibility on individuals and nations.”